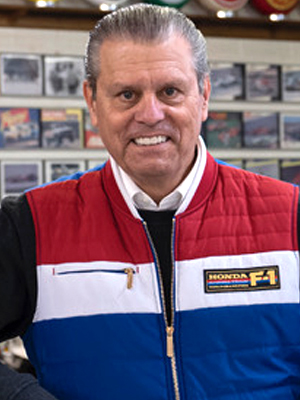 Many of us are familiar with the “glory days” of auto racing, but few have lived the experience as Ed Justice, Jr. has. His family’s history in the world of auto racing runs as deep and rich as the sport itself. As the son of Ed Justice, one of the famous Justice Brothers, Ed was exposed to the greatest icons of the automotive and racing industry from his earliest days.  It was for this reason, years ago. . . at the ripe old age of 44, Ed was the youngest person to be inducted into the “Old Timers Club” at The Indianapolis 500 Speedway. Ed’s father and uncles won the “Indy 500” in 1950, teaming up with Johnnie Parsons and their former boss and friend, legendary racecar builder Frank Kurtis. Later that same year, they won NASCAR’s first 500-mile race with driver Johnny Mantz at NASCAR’s first Super Speedway in Darlington, South Carolina.

Ed’s friendships don’t end in the motorsports world though. . . he is also well known among new car manufacturers, custom car builders and every other form or avocation of the motoring world.   It is Ed’s expertise in creating a great interview in combination with his knowledge of racing history that has landed him in the position to interview legends like Dan Gurney, Carroll Shelby, Parnelli Jones and Bobby Unser.

Relatively unknown to many is that Ed is an award winning graphic designer and a former member of the faculty of the ART CENTER COLLEGE OF DESIGN, with his Made in L.A. classes.

Of course, it cannot be forgotten that for over 25 years, Ed has been the President and CEO of Justice Brothers, Inc., a legendary international manufacturer and distributor of lubricants, additives and cleaners founded by his father, Ed and Uncles Gus and Zeke. Ed and Justice Brothers have been inducted into the Route 66 Hall of Fame, the West Coast Stock Car Hall of Fame and the Dry Lakes Racing Hall of Fame. Ed also owns the Justice Brothers Racing Museum & Private Collection which contains an eclectic personal collection of cars that Ed and his father started gathering many, many years ago..